This is not a hackerspace, it's just a tribute

Kernel Panic Room was a hackerspace embedded in the heart of Querétaro. Its objective was to be the center of a community of hackerminded people in the city, and a bridge for everydaynormal folks into the wonderful world of free (as in freedom) technology.

This entry is a write-up of the history, practice and downfall of KPR. It is intended as a real-life story, not as much a technical text of any kind, so that someone can hopefully avoid the mistakes we made. Furthermore, every word in this text is typed by one person, so forgive the potentially skewed views and personal grudges that may or may not be visible in the text. love & kisses, st4t3.

Notice the mess, but also do notice all the potential

The original idea of creating a hackerspace rose from the fact that there are virtually no places like this in Mexico. The only place we could think of (no offense to the rest) is Rancho Electrónico, located in Mexico City. The other spaces that we know of are more akin to makerspaces, where a flat fee is charged for use of the space. What we wanted to do was establish a collaborative basis, where the expenses could be split among voluntary paying members and/or paid for by workshops and activities by the members for external people. However, we didn't have enough willing friends, so two of us just decided to rent a place and call it a hackerspace, and see if that sticked. The place we chose was actually great. There was (still is) a house in downtown Querétaro in which stood a vynil store and record label (now defunct) that sometimes organized musical events and sold beer, as well as a library that sold mezcal under the counter and also organized literary events. We convinced the guy who rented the whole house (and under-rented parts of it to the library and other projects) to give us a good rate on a small room, upstairs from the library. That's how KPR was originally born.

For the first several months, it kinda worked as a personal lab. We would go there whenever we had free time and drink bourbon while hacking stuff. Coreboot was something I was already familiar with and interested in, and this one time we helped a guy rescue some BTC from a wallet he had trapped in an old desktop. He was so happy that he gave us about 0.6, which we promptly used to buy a nice new router, 2x X230's, 1x T530, some cheap good speakers by Logitech and pay the rent for several months. This is the sort of experiences (and, as you understand, I don't mean the "getting BTC in exchange for help" part of it) that make having a space known for being a sort of for which Our idea was to try and lure the people who came to the house for the books and music into learning something about free technology and maybe get them to install Linux. 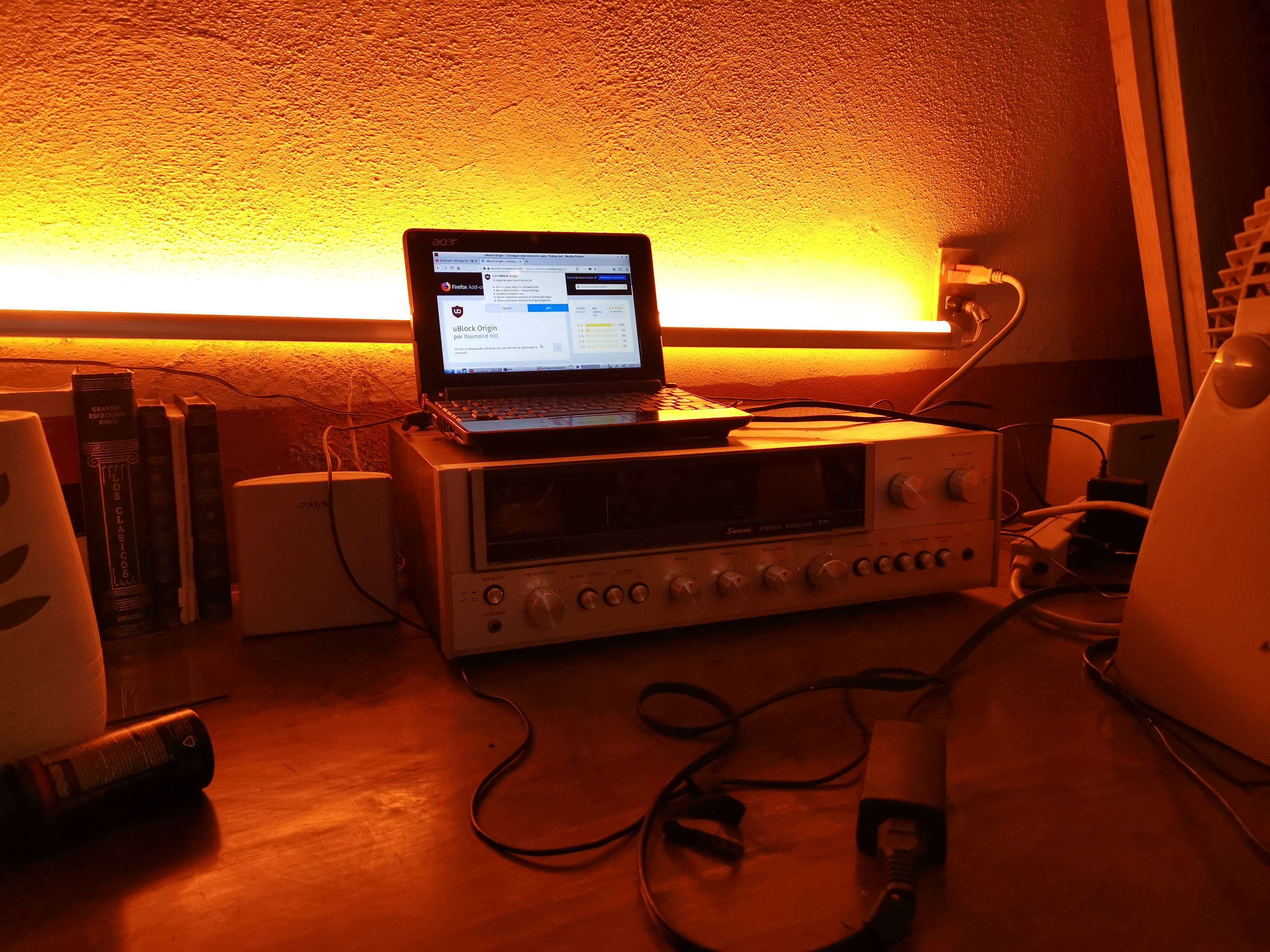 We got this beauty for free, from a friend's mom. It works marvelously except for some sort of weird bug that makes it lose one of the stereo channels when certain sounds play. It is easily solved by reconnecting the plug, though.

Eventually, the person who rented out the whole house and from whom we rented our respective spaces decided to just stop two weeks from the moment he announced that to us. We had a choice to make - either we all split and continue our projects separately (namely, the hackerspace, the library and an art gallery that was just starting out there), or we could try and pay the full rent together. The problem with the second version, which we all obviously liked better, was that books, art, computers and mezcal don't attract too many people. Beer and music does. So we decided to rent an additional room in that house, where the bar of the vynil store was located originally, and open our own bar. The lack of funds to do it led us to building the bar around a post-apocalyptic theme, so that we could basically not invest much into opening it, yet have people come. That's how the БУНКЕР was born. Needless to say, it was a huge success. As I functioned as the bartender at that place, the hackerspace, regrettably, occupied a secondary priority. After all, what we cared the most about at that time was to pay the bills and keep our places open.

From there on, with the rise of the bar, the idea of starting a cohesive cultural center appeared in our heads. Instead of just being a house full of projects, why not making a project revolving around a house full of spaces? Fast forward a month or so and the problems with our neighbours, because of the noise, became unbearable. We decided to find a new house, and did so about a week later, by pure chance, while going out for lunch at a slightly-farther-than-usual place. 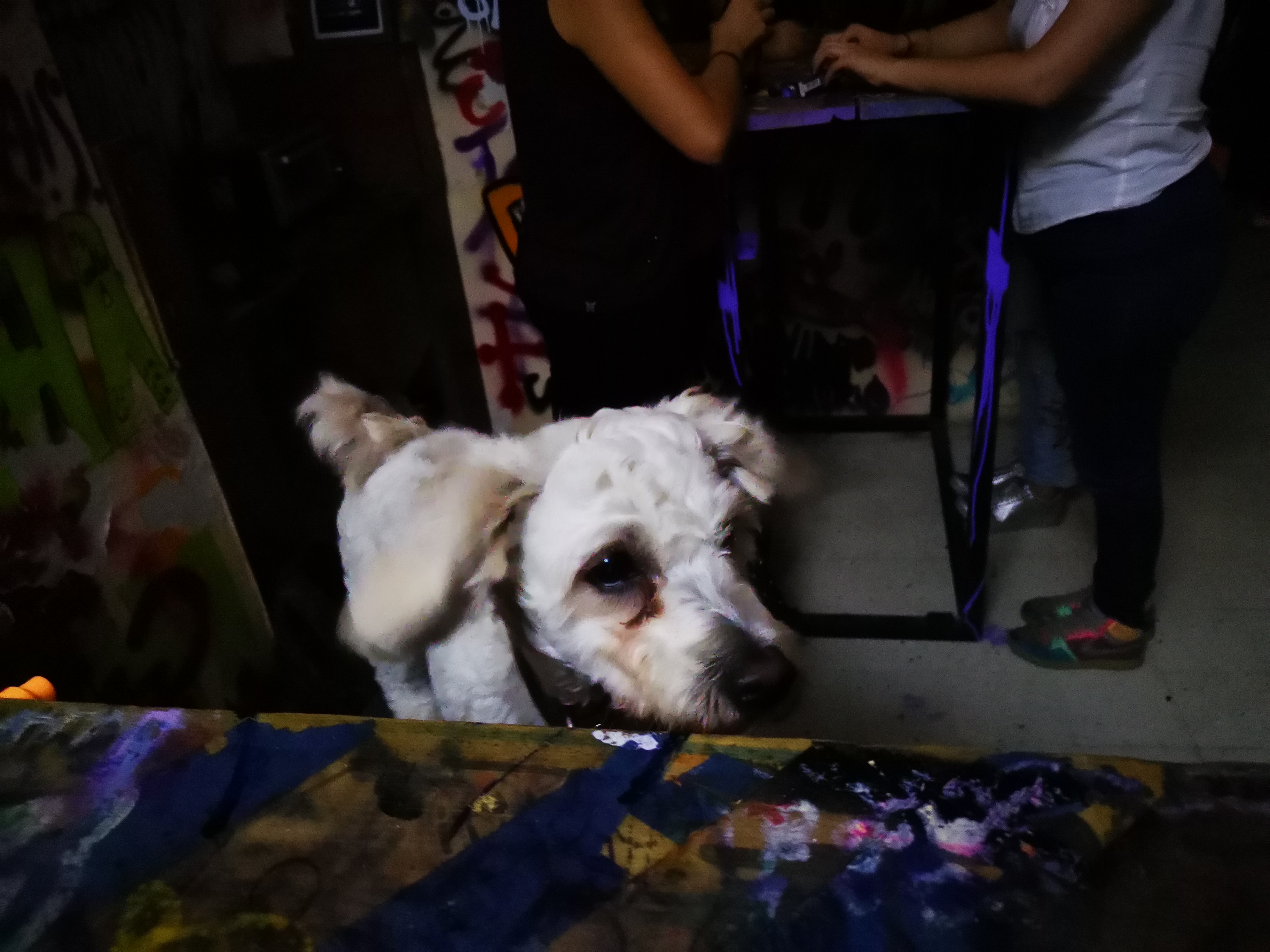 The dog in question.

Unfortunately, the fact that the hackerspace was relegated to a second priority endeavour and that the main attraction of the house was, after all, beer and artistic events, it was inevitable for toxic people to make it into the organization. In this specific case, it was a person who entered the project initially as social media manager, in exchange for having a place to work where they could bring their dog. This was their idea in the first place, but since none of the others wanted the chore of logging onto the evil websites of soul-sucking megacorporations on a daily basis, we accepted. While their involvement in the project was little, relegated to doing social media management and some occasional poster editing, everything was fine. Problems started to appear when they rode the high horse of being a founding member of the collective. In the second house, instead of sharing the hackerspace, they decided they needed a personal office "to conduct official cultural center business and work". st4t3 was the only person who actually tried to argue with that petition, but it was all to no avail, as everyone else seemed to accept it as a form of comfy compromise.

From there on, of course, the influence of this toxic personality only grew stronger. It has to be said here that this wasn't the person doing most of the work around. Their work consisted in keeping in touch with the people that wanted to organize an event at the place and occasionally (far from always) design posters for these events. The work of actually administering the place, cleaning up, restocking, talking to providers and actually meeting people on a daily basis on premise (which is what usually happens before someone decides to do something in a venue) was all done by the library man and st4t3.

Pictured, the kind of customers you wanna have in a post-apocalyptic bar.

In due time, the hackerspace started getting blamed for not contributing enough to the house overall, and calls were made (guess who made them) to shut it down and turn it into some sort of coworking space (nobody really got to asking how that would be any better). This is despite the fact that st4t3, who was in charge of the hackerspace, was also in charge of selling the beer, which accounted for about 3/4ths of all the money made in the house, which obviously ended up being paid for rent, basic services and other expenses. The idea of this toxic wanna-be administrator was that every room had to generate equal amounts of money for the rent. This, of course, didn't include "the office" as they deemed it necessary for the functioning of the space.

Shortly after this, around February of 2020, Kernel Panic Room decided to cease its existence in that house and its members stopped working with the place altogether.

Eventually, when the toxicity spilt over the remaining members of the project and the administrator was literally kicked out, diplomatic relations with the house were restored.

Some more of our propaganda.

The house still stands and the library is still open, along with the bar. The rest of the spaces have since changed.

Now, all this might seem like a very long, very random story that has little to do with hackerspaces and more with some wacko personal issues that someone somewhere had. However, in all of this, there are several important lessons to learn: