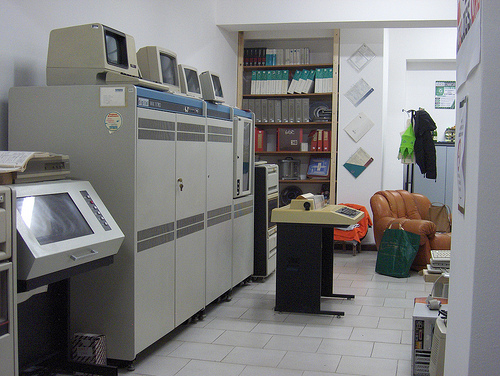 Verde Binario is a cultural association born in December 2002 and located in southern Italy, in the town of Cosenza.

The name "verde binario" means literally "green bits", since our interest is focussed on the relationship between environment and technology.

Since its early days, the association is working on two main projects, both involving retired IT hardware retrieval and restore.

Our first project, "MIAI - Museo Interattivo di Archeologia Informatica" ("Interactive Museum of IT Archaeology"), is a permanent exhibit of working historical systems. Visitors are welcome to interact with all the working machines experiencing the feel of old systems, softwares and interfaces. Our collection counts more than 500 vintage systems, ranging from early '60s computers to big mainframes, a timeline of home computers and videogame consoles, old Apple systems and IBM PC clones, UNIX workstations, and all kinds of weird peripherals. The exhibit includes also a huge library, more than 4000 volumes among old books, manuals and magazines.

The museum is currently hosted in our own home, but we are hopefully moving it in a larger place in the future. We are already accepting visitors whenever the space is open to the public (see below). Guided tours are also available at a small contribution fee (3 EU) and by email reservation (museo*AT*verdebinario*DOT*org).

While looking for vintage hardware for the exhibit we immediately noticed that many people were throwing away newer hardware, mainly assembled x86 machines with no historical interest, but in good working order. Quickly, a "Trashware" project started: we take all the PCs we can and take them to our labs. Small hardware repairs and/or upgrades, cleaning, and open source software bring them back to life and set them ready again for use.

We give all the PCs we restore to anyone who needs it at a symbolic fee, for covering the retrieval and work costs - usually from 30 to 50 EU - and for contributing with verdebinario's activities. We used some of this stuff ourselves mainly for the lab and for office use. We've set up a small free internet point in our place, with 100% recycled hardware and 100% free software :)

As we strongly believe in cooperation, the MIAI project is walking side to side with "MusIF - Museo dell'Informatica Funzionante", a similar computer museum run in Palazzolo Acreide (Sicily) by some of our hacker brothers from FreakNet :-)

Aside with our two main projects we promote cultural, educational and social events and hacker attitude.


We are open for sure every