This survey was created with the idea that our individual expectations of a makerspace might be biased or missing aspects that are crucial to others, and that investigating that would lead to improvements in the set-up of new spaces.

The anonymised (contact emails removed) results can be found in this ODS spreadsheet.

I chose to close the survey when it hit an even 100 respondents, before noticing the duplicate. The final 12 or so responses required some encouragement to obtain and I perceived that their content had begun to take on an aggressive tone, possibly as a result.

Subsequently one UK response was found to be a duplicate and has been deleted from the ODS document, leaving an actual total of 99.

It is freely acknowledged that these results are likely skewed by virtue of the different lengths of time each forum had to respond. Any future version of this survey should be posted to all forums at the same time and include a unique link on each so origin of the respondents can be accurately recorded.

The survey was revised in the following ways while active:

Many fields of the survey were left as free text entry to prevent limiting responses to my own expectations. This however required a lot of manual interpretation and editing. For instance; the general location “London” showed as spelt 4 different ways.

The nature of the survey and the method of its promotion have biased it to English-speaking respondents from the UK and America.

Stated locations varied in precision wildly. No reliable estimate of local population size trends are possible by me.

19 of the 99 unique respondents gave no additional material desires beyond their basic expectations for a hack/makerspace. This includes “more of the same” type statements.

52 of the respondents anticipated using all the equipment they had thought a hackspace should have as standard.

Some items have been grouped together through apparent intent. For instance all mentions of just “lathe” have been assumed to mean metal lathe, as wood lathe is often defined distinctly.

The intent here was to look at what people expected such a workshop to have as standard compared to what they'd actually expect to use of that selection. As such, I was not expecting people to state they'd use items they did not expect such a workshop to have. As such some items listed totalled higher anticipated use than anticipated availability.

OpenOffice crashed over a dozen times while creating the sorted tally from the raw results. As such, position may have been lost several times in addition to personal interpretation of meanings, meaning the results of this section can only be considered general trends and not absolute figures by any means. I have switched to LibreOffice for subsequent tallies. This manual step was necessary as descriptions and spellings varied wildly.

Results are formatted as nested from general to the specific, with expectation count first and anticipated usage count following in brackets. They are not presently sorted in any numerical order.

84 unique respondents went on to list additional facilities, beyond what they had already listed as their basic expectations. It is interesting to see what some people consider beyond the essentials, especially where it is considered essential by others. Their tally is as follows, divided into some apparent categories;

Reading through the responses I felt it necessary to separate out the UK results as they were noticeably different from the results from around the world. All responses have been converted to GBP (UK Pounds) using the XE.com exchange calculator on 26th Feb, 2018. They do not represent the proportional value of those amounts in their local regions.

16 individuals would only pay the same for additional facilities as they would for basic.

Results for basic expectations in the UK gave a clear peak at £20 per month, but generally more willing to go a bit over that than under. 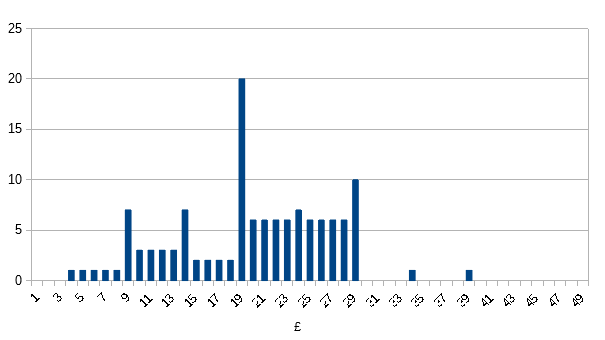 Results from the rest of the world are largely continental North America. The anticipated payment for basic facilities show strong peaks at 50-100% more than the UK.

The results are cut off at £90, but there were three people willing to pay well beyond that, going as high as £179-£358, depending on which membership option they were using as a comparative example.

For workshops with the extended expectations, results trended higher. Where the quoted figure was substantially lower than the basic figure, it was assumed to have been entered as how much extra they were willing to pay, rather than the new total.

For the rest of the world, the response is a little surprising, and while there are less lower payments, there are also less higher payments, and the payment for a workshop with additional services peaks at roughly the same place.

Three responses were off the graph, one as high as £441. Again, depending on which membership they intended to be using for comparison.

The curves for weekdays are largely the same, with highest peaks from 6pm to 10pm, suggestive of intention to use the workshop mostly after day job hours. Curves to the weekend show a clear desire for all-day use from morning to midnight, but Sunday being slightly less than Saturday.

Working into the early morning is a minority of results, but still notable. It remains in the low teens through the week, raising slightly on Friday night and peaking on the weekend.

In addition to the workshops own facilities, respondents desired the following nearby services;

Items that seemed to relate to the workshops own facilities and not those nearby seem to include; tea/coffee & biscuits, good lighting, social space.

Aspects that would drive people away or prevent them from joining in the first place tended to fall into three broad categories; behavioural, procedural and material. For most cases I did not count them strictly as they were so intermingled. 83 individuals answered this section.

22 responses expressed direct concern for the equipment. Mostly in terms of the equipment being unavailable to use, and mostly because of poor maintenance but also due to lack of timely training opportunities or demand being too high for the equipment available. An additional reply also expressed concern for tools not being owned by the workshop itself, which could be considered a compounding factor to the same concerns as loaned tools can create conflicts over who pays for or performs maintenance or training.

A similar concern is expressed a number of times for lack of access to materials.

Intolerance was also a prominent concern, in the form of sexism, racism, ageism and ablism. Likewise it was hinted at in mention of environments that were largely or exclusively older white men or encouraged “bro” culture. These were covered explicitly by 10 responses.

More than just intolerance is bad behaviour from other members. This is mentioned as; aggression, theft, lack of respect for personal boundaries or expertise, squabbling, bullying, wilful unhelpfulness, drug use, unwelcoming attitudes or cliques, elitism, being drunk on premises, being creepy or rude, loud, egotistical, deceptive, and generally negative or otherwise toxic attitudes to other members or the workshop as a whole.

This ties in with concerns of how poor management may permit or encourage these behaviours. These also tends to tie into the concept of workshop politics, which is mentioned on it’s own explicitly 5 times.

The concerns of too much authoritarianism seemed about matched by the number concerned by overly lax rules or enforcement. In practice though perception of authoritarianism is more about poor methods and attitude employed in enforcing biased or unfair rules than generally enforcing rules per-se. So while it’s tempting to see this as an amusing conflict of desires, there really isn’t one. Or shouldn’t be.

Because of previous mentions of having on-hand assistance, it feels that poor quality staff is a separate concern from abuse of authority, presuming that those managing a space are different from those operating as staff.

A few other singulars stood out for special consideration.

Corporate sponsorship as a negative is understandable. Makerspaces are often used by those developing products or small businesses, who in turn are often seeking funding. Corporate sponsorship can act as a form of vendor lock-in both for the makes and types of equipment used, but also what agencies may be available to provide startup funding to members. In a more generalised sense, makerspaces can also be hunting grounds for more predatory investors who can take advantage of less experienced developers in the classic “pump & dump” investment strategy.

“Lack of cameras with audio recording” is a singular response that seems to reflect on the concern that trouble between members is sometimes never resolved as it often treated as one persons word against another without video footage with legible audio to provide evidence.

A workshop being “a drinking club with a making/hacking problem” seems to relate to the drinking culture in tech, and how some workshops can just be an excuse to meet up and get drunk rather than do practical work.

An “acceptance of nonsense by organisers. Just ban people already and bin all the shit.” It feels like this relates to the old list of Geek Social Fallacies. Specifically GSF1; “Ostracisers are evil”, which expresses that as most geeks have had formative experiences with being ostracised, they are unwilling to do the same themselves at all costs. This would seem to fit with the suggestion that some organisers are unwilling to remove otherwise disruptive people from the community. It also likely relates to the hackerspace tendency to hoard equipment and materials that are of little use to the space and serve only to increase clutter.

42 responded to this portion with comments, most of which repeated what others had already stated in previous sections.

One suggested weather and traffic alerts for members when they might cause issue getting to the venue. Regular formal meetings between the community and those running a venue was another useful suggestion, as-is being open about the running. And hosting community group projects. I think the particle accelerator was sarcasm.

A good quote from this portion to end on is “workshops are gyms for makers... we go to socialize as much as make!”

The concerns about intolerance including sexism seem to suggest that the one respondent who jokingly wanted “big titty strippers” as basic equipment has the capability to potentially drive away at least ten other respondents through their attitude. 1% of members being able to drive away 10%. In economic terms alone, it makes a good case for actively removing that 1% before they drive away ten times as many.

Notes to future versions of this survey[edit]

Future surveys should be organised by people better versed in setting up surveys for easy cross-analysis of different elements. For instance, it might have been very useful to easily filter by country, ages or class of activity, to better identify trends from sections of the community.

Using a survey system that allows unique links or tracking to automatically record where a survey link was followed from would be tidier and more comprehensive than self-submitting where someone found it.

Allowing the input of numerical ranges for payment and attendance estimates rather than free-text and tickboxes would clean up responses a lot.

An option to record gender and ethnicity would have been useful for better gauging the diversity of those responding.

A better way of recording user location would have been useful to avoid manual lookup & correction.

An option for entering users income would be useful for gauging what proportion of their income they are willing to spend on workshop access.